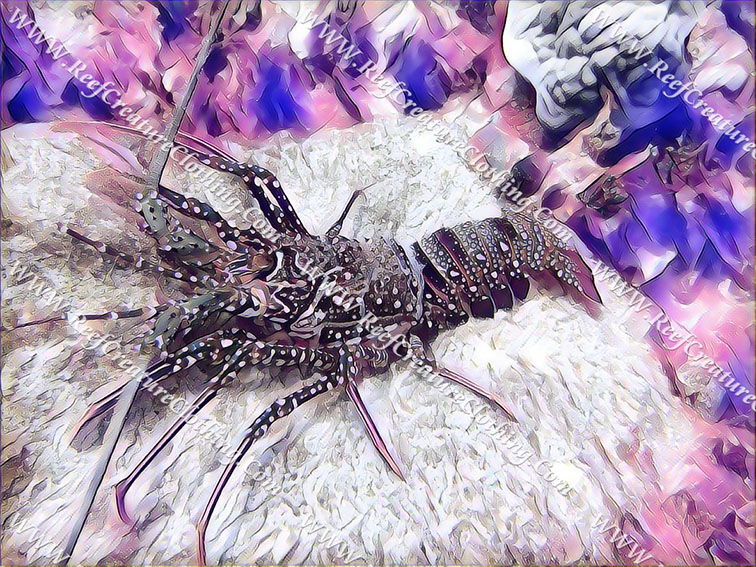 The Spotted Spiny Lobster (Panulirus guttatus) is a close relative of fellow Crustacean, the Caribbean Spiny Lobster; a favourite on local Caribbean restaurant menus. As its name suggests, it is a member of the spiny lobster family (Palinuridae), that also includes around sixty other species found throughout the globe in temperate and tropical waters alike. Although spiny lobsters resemble ‘true lobsters’ superficially they are not, in lobster terms, closely related and are easily disguisable by their long thickly based antennae and lack of claws. See here for more information. This lack of claws often surprises tourists dining out for the first time, as many think the claws are the most delicious bit, and feel a bit short changed when they realise it is only the tail that they are going to enjoy. Oh, the trials of vacationing in the Caribbean!

Coming back to the Spotted Spiny Lobster, this species is much smaller than its mainstay Caribbean counterpart, and lives a more secluded life, rarely seen while diving during the day, instead not venturing out to forage until sunset. During the day it lives deep within the reef structure or under rocks. This is a bit of a shame as it is beautifully decorated with many white oscillated spots that can only really be properly appreciated by day. The Spotted Spiny Lobster goes by a number of names, including the Guinea Chick Lobster, and on some Caribbean islands, ‘Crayfish’. This latter name is once more confusing as it is even more distantly related (again, in lobster terms) to true crayfish (or crawfish), lacking the claws of these freshwater namesakes. Despite all this confusion, one thing is clear, lobster or crayfish, spiny lobsters are probably the most sought after evening treat on the menu throughout the Caribbean.