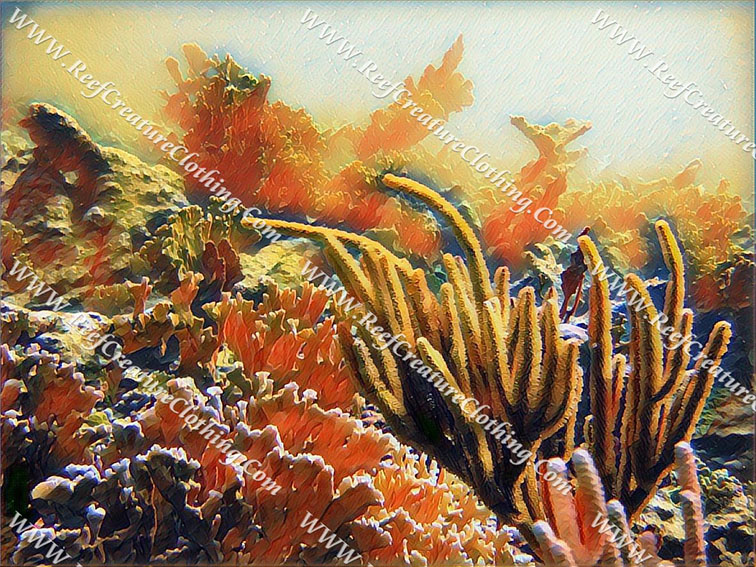 Soft Coral and Elkhorn reefs such as that pictured here were once common place around the Caribbean. Although the photograph used to make this design does a good job of hiding the truth though digitised colourations, the Elkhorn in the background is actually dead. Having suffered from a decades long mortality event that began sometime in the 1970s, it is today quite rare to see large healthy stands of live Elkhorn. Instead, almost all that remains are gradually eroding skeletal structures, slowly turning to rubble through sea erosion and damage from sporadic storms. Here and there small pockets survive, either as small colony remnants or newly recruiting specimens that face an uncertain future. Their demise has been documented as due to coral disease, primarily White Band Disease, and more recently White Pox Disease. The exact cause for this outbreak that continues to this day is up for debate, but may be due to increasing nutrient levels and an overall decrease in water quality, or, as others suggest, may have been introduced through toxins in African dust clouds that drift over from Africa and fall into the Caribbean sea as rain. Whatever the case of White Band Disease, the latter disease incarnation White Pox has now been found to originate from human sewage outflows……..not nice: see here.

Moving on from this somewhat depressing subject, Soft Coral and Elkhorn reefs still exist to some extent, as soft corals are alive and well and form dense forests swaying in the swell. Sea Fans, Sea Rods, Sea Plumes and more, all probably loving the fact they have more space to grow and enjoying feeding off the increased levels of phytoplankton no doubt caused by the increased levels of nutrients in the once nutrient poor waters. It may be a shift in community structure, but at least there is still some life down there. Hurrah!