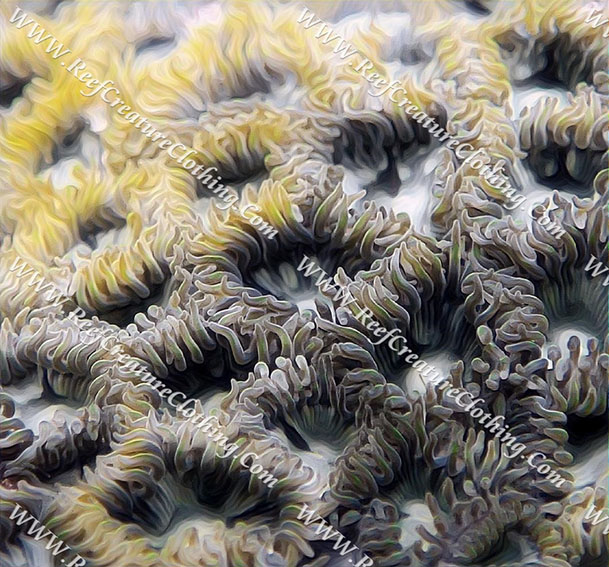 The Mat Zoanthid (Zoanthus pulchellus) is a member of the phylum Cnidaria, that also contains corals, jellyfish, sea anemones, and others. This group is exclusively aquatic but predominantly marine, and distinguished by nematocysts (or Cnidocytes as they are also sometimes referred to): specialised cells with an explosive quality that fire a barbed arrow-like structure containing a toxin when touched. This is what causes the famous jellyfish sting – for more information on these specialised stinging cells see here. Cnidarians, in this case the corals, are also responsible for producing the largest biological structure on the planet, and the only one that can be seen from outer space, the Great Barrier Reef. A truly amazing group of creatures, and one that will be featured many times in our designs and also through posts similar to this.

But, back to the Mat Zoanthid. Quite an unassuming member of this group, the Mat Zoanthid can’t boast a powerful sting or to be the builder of impressive structures. Instead, this relatively uncommon Cnidarian grows in colonies, clinging lazily to rocks in shallow shady areas that can boast a decent amount of water circulation. Despite lacking a powerful sting, they still use their nematocysts to hook themselves passing prey that drift past their tentacles. These tentacles can vary in colour, but are often iridescent, almost metallic looking, ranging from greens to yellows to browns. So on the smaller scale, still an impressive Cnidarian. You just have to look for the details.