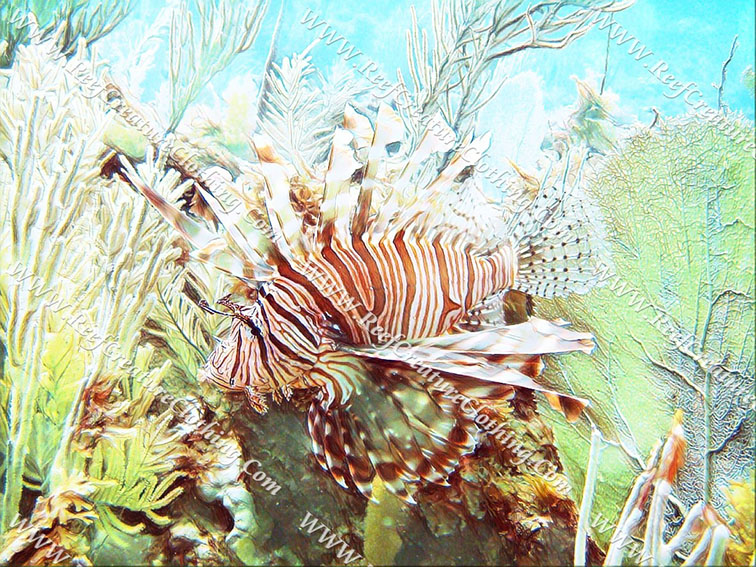 One of the most ornate species of fish found in the Caribbean, the Lionfish (Pterios volitans) is actually a new arrival to the area after being inadvertently introduced in the late 1980s or early 1990s. The exact mechanism behind this introduction is still open to debate but it most likely occurred due to either accidental or purposeful aquarium releases. Since their introduction they have now spread throughout the Caribbean and despite eradication efforts look set to remain. For more on their invasion and the potential problems it could cause, see here.

Stepping aside from the invasion story and associated debate, it cannot be denied that the Lionfish themselves are an intrinsically beautiful species, and despite the bad press, they are always exciting to see when diving or snorkelling. They are a resilient species, able to thrive in a range of water temperatures, and in depths between 5 and 500 feet or more where they usually hang around structures and hide under recesses. They are reportedly capable of reproducing every 50-60 days, and release thousands of eggs that float off in ocean currents and widely disperse. They are also voracious hunters and use their long fins to corral juvenile fish and invertebrates into a corner where they can be pounced upon. Incredible fish all round really, although this isn’t necessarily good news for an unprepared Caribbean ecosystem.

The good news is that hopefully the ecosystems affected are beginning to find balance, with a few native species learning to dine on them, and a taste being developed on land, driven in part by the tourist industry and the restaurants there who cook them: So we can maybe enjoy seeing them when diving, eating them when on land, and not worrying quite as much about the baby native fish at the same time.